Welcome to the Moon and Other Plays 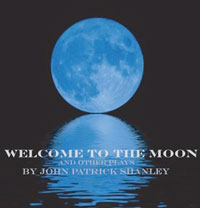 The Un-Common Theater Company is starting the summer off right with a phenomenal staging of Welcome to the Moon and Other Plays. 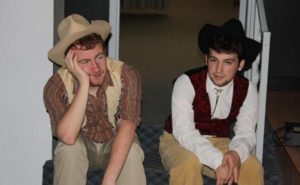 From the mind of Pulitzer Prize Winning playwright John Patrick Shanley, writer and director of the critically acclaimed and film Doubt which was nominated for 5 Academy Awards, comes a collection of short plays that examine the full scale of the human condition. Shanley, with a perfect blend of humor and sincerity, shows the audience love and fear, joy and pain, and a good ol’ fashion western gunfight. 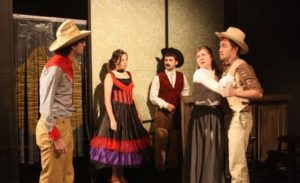 The plays in the collection all shift from the cold reality of the real world to the absurd humor of Shanley’s imagination, sometimes within a few lines. The first play, The Red Coat takes the audience to a Bronx sidewalk where a young man waits to expose his true feelings to a major crush, Mary. Shanley reminds the audience just how difficult it is to truly understand another human being. Suddenly, the second play Down and Out places the audience in the middle of a rundown apartment owned by the failing Poet. His Love holds the key to his soul but a hooded Figure means to ruin the Poet’s life, by taking his library card and then his soul. Let Us Go Out into the Starry Night, the next play in the show, involves a man plagued by ghosts and monsters and a women whose only friend is a dummy. The pair meet and find that, through being serious with each other, they are able to enter a magically world of stars and planets. Following the ascent into the starry night, the audience lands down in Out West, a stereotypical wild western town. The entire plot of a classic western is played out in just a few pages. Out of the west and into Central Park, A Lonely Impulse of Delight tells the tale of a man who wants to tell his best friend that he is in love. This might seem ordinary, if it were not for the fact that the man is in love with a mermaid that lives in Central Park Lake. The show ends with the title play Welcome to the Moon. Shanley ends the series in a Bronx bar where two old friends, Vinnie and Steve, are meeting for the first time in years. However, Steve has much more baggage than Vinnie expects and, with the entrance of their old pals Ronnie and Shirley, hilarity and tragedy ensues.

Welcome to the Moon and Other Plays is presented through special arrangement with Dramatists Play Service.